Doing something, is better than doing nothing at all - The Goals Hub
Skip to content 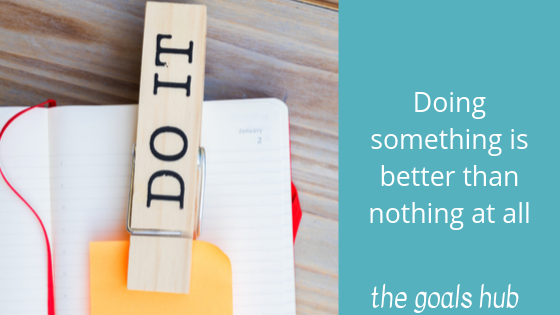 “Success is the sum of small efforts, repeated day-in and day-out.” ~Robert Collier

I want to share a concept I heard recently that I loved.  It’s called the infinite 1% and I heard it from another coach, Kara Loewentheil.  She used it to describe the biggest difference in the world isn’t between people who have done a little versus people who have done a lot. It’s actually between people who do nothing and people who do something.  Why I liked it, it’s because it’s a great way to re-frame how you look at your goal, and to motivate you to  take action.

Basically, it means doing something, related to your goal, no matter how small, is better than doing nothing at all.

When you set a goal, it usually requires you to make some sort of change.  And, many times your brain will be resistant to that change.  That’s because it will think what you want to achieve will be require a lot of work.  And, guess what, your brain doesn’t like work.  Its motives are to seek pleasure, avoid pain and save energy.

Because of this, it’s easy to fall into the trap of thinking your goal is so far away that the first few steps barely even count.  And it’s this thinking that causes some people to give up or worse, not even bother to start.

But, what if instead of focusing on how far away your goal is, you took some guidance from Newton’s first law of motion which states:

In other words, sitting there and doing nothing will achieve just that. Nothing

But, doing something, even if it is the absolute smallest step you can conceive of, will achieve some kind of positive result, and then you have something to start with, a seed to build from.

Let me share a story about a really big glass vase that we put coins in that highlights this beautifully.

For a long, long time, the vase just sat there, empty.  It was far too big to use; flowers would just get lost in it.  Really, when you think about it, it was pretty useless.

Until, one day, Andrew dropped his change in it and said ‘I’m going to see how much we can build up before our next holiday – might be a bit of extra spending money’

Those few coins looked ridiculous in there and it would have been easy to just think ‘what’s the point, this will never fill, let’s stop’.

But, he kept putting his coins in there each day and by the time we took our next holiday there was well over $1000 in there.

It would have been easy not to start.  Or, to look at the few coins and think, it really won’t make any difference and therefore not continue. But when it came time for the holiday we were shocked at how much money had built up in there.

That’s how big the difference between doing nothing and doing something is.

It’s the part people find the hardest because it’s hard to go from being in a state of rest and go into a state of motion.

So, rather than focusing on how far away your goal is, focus on just getting started. Because doing a little is everything.  It means you’ve done something; you’ve created motion.

This is the tragedy of perfectionism (believe me I know, I used to suffer badly from it).  Perfectionism (also known as a form of procrastination) keeps us thinking that doing a little is pointless.

But, guess what happens when you sit around worrying about how what you can do is not enough.  You’re just sitting around thinking it’s not enough and so you do nothing!! You achieve nothing.

If you’ve managed something, no matter how small, you’re closer to your goal than you think.  So, keep going.

And, if you haven’t started because your goal seems too far away, or you feel what you can do isn’t enough, what are you waiting for?  Stop focusing on the wrong thing, how far away your goal seems, and instead focus instead on the smallest and easiest thing you can do, to get started, because, remember, an object in motion stays in motion.

What ever that thing is, commit to taking action on it today and focus on the fact that just that tiny 1% means you are closer to your goal than you think.