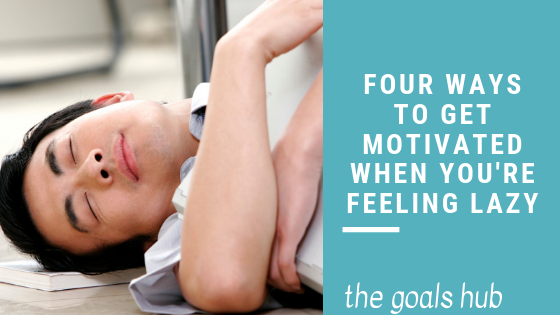 No matter who you are, it’s hard to stay motivated ALL THE TIME.  Everyone has tasks that they don’t like or they put off.  Also, sometimes there are just when we don’t feel like it.  There are days when we just feel tired and lack energy.

Rather than give into those feelings and fall behind on your plans and goals, which can lead to further laziness and lack of motivation, there are a few small things you can do to get motivated and create momentum.

Look at the big picture, your why:

If you aren’t motivated, you may not have a bit enough reason as to why you want to hit that goal.  Working towards something is just that…work!. It can be hard, tough, uncomfortable.  A way to overcome that is look is reflect ‘what is my reason for doing this?’. ‘Why is my goal important to me?’. ‘If I don’t do this now, what impact will it have?’.  ‘If I do this, what impact will it have?’.

When you lack motivation to start on something, you may just be focusing on the now, rather than the big picture.  Reconnect with the big picture,  and your why and create so much pleasure around achieving that big picture that not starting is no longer an option.

What’s your body language when you’re feeling unmotivated or lacking energy?  Think about it. You’re not moving very much. You may be slumped over, slowing sinking into your chair or the couch.  Your body language and the lack of physical movement is directly linked to a lack of mental energy.

So, get off your butt and get moving.  If you’re physically moving and engaged, then it’s far more likely that you’ll feel mentally engaged and energised.

Go for a run, do some push-ups or star jumps. You aren’t getting any work done anyway so break the state.  Get moving and get blood pumping through your veins.  Then come back to whatever it is that you were doing.  The movement will spark renewed motivation.

Make it a game:

The most important part of any task is just starting. If you’re struggling to get motivated then you will find that motivation often comes after starting.

Sometimes, when I have a task I’m procrastinating on or I don’t really want to do, I use the pomodoro technique and turn it into a game.

The pomodoro technique uses a timer to break down work into intervals, usually 25 minutes in length, separated by short breaks.

I set up timer and work for 25 minutes.  I then take a 5-minute break and reward myself with something – quick email check, a little snack, etc.

How I make it a game – for each 25 minutes I set a challenge. Such as, in the next 25 minutes I must have my blog post outlined and half written.  I have a slightly competitive nature so once a challenge is set, I hate not meeting it.

I live and die by my to-do list and get so much satisfaction crossing things off, no matter how small it is.

Now normally I wouldn’t suggest working this way but if I am trying to overcome procrastination or laziness, I pick the smallest, quickest, easiest thing and just get it done.

If I’m feeling unmotivated and have a couple of super easy, super-fast quick wins on my list I’ll just work on getting those done as quickly as possible.  Often, that’s enough to kick me into gear, get momentum and then I can move onto more of my priority tasks or the task I was putting off.

Stop telling yourself you need to be motivated to get anything done.  If you do that, you’ll convince your mind you can’t work unless you are feeling motivated.  Instead, recognise that you may be feeling a little off and take the steps above to get started.  What you will find is that over time, you’ll train yourself into motivation, regardless of how you are feeling.

Do you have any other things you do when you’re feeling a bit lazy?  Share them below.