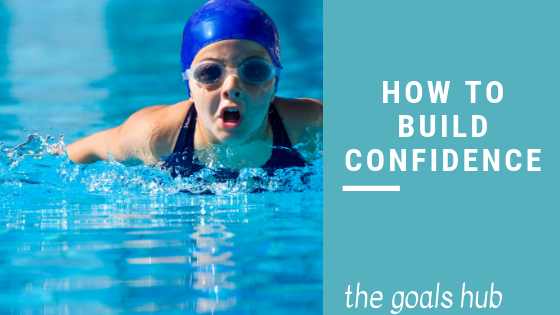 This week my ten-year-old daughter, Sophie, gave me a brilliant lesson in how to build confidence. She had her school swimming carnival and, to be expected, was a little nervous before hand.  It’s only the second one she has competed in.

Last year she got a ribbon in each race, two thirds and two fourths, so I think she was feeling a bit of pressure.

Her first race was freestyle and, as she hit the water after diving in, her googles fell off. She paused and tried to fix them then realised that would take too long. So, she just kept swimming.  I was so proud that she kept going.  But she couldn’t see.  She banged into the ropes a few times and her goggles were strangling her.

She finished the race, didn’t place and burst into tears.  It was heart breaking to watch.  I gave her a massive hug and congratulated her on the fact that she just kept going.

Her next race was backstroke.  She lined up waiting for her turn and then turned and ran over to me in tears.  “I don’t want to do It”.  “I’m scared”. “I’m not doing it”.  I walked her back to the line-up, and she was so upset.  Someone told her she didn’t have to race if she was scared.  I said “No, listen to me. If you don’t get in now and overcome this, you won’t want to do the next race or the next race.  Tell me what you’re scared of” After a bit of coaching she got in the water, still crying.

The race started, she was still crying.  I walked along the pool and noticed she was getting faster and faster.  She placed second!  She got out of the water ecstatic!  It was her best placing in a race ever and not even her best stroke.

She was so happy and proud and what a wonderful moment as a parent.

The next race was breaststroke, her favourite stroke and she came first!  In the final race, butterfly she came fourth.  After a disastrous start to the day she was over the moon.  The next day at school she found out she qualified for districts for both breaststroke and butterfly.

How to build confidence:

You may wonder why I’m sharing this story with you. It’s because it is such a good example of how to build confidence.

Sophie’s bad start resulted in her losing all her confidence with swimming. She was scared she would do poorly in all her races.  If she didn’t get back in the pool after that first swim, that fear and lack of confidence would continue to grow.

By getting back in the water, even though she didn’t want to, she proved she could do it.  She proved there was nothing to fear.  After all, a crocodile wasn’t going to leap out of the depths of the pool and get her.  The fear was all in her head.

She proved, the only way to manage your fear and build confidence around something, even if it is something you are completely scared of, is to just do it!

Are you scared of public speaking? Guess what, you won’t be able to wish your way out of it and ‘wait’ until you feel more confident.  You will only build that confidence by doing it.

Are you scared to make that sales call?  You can’t ‘wait’ until you feel more confident about sales and then do it.  That day will never come.  Just pick up the phone and make that call.  And even in you stuff up, what’s the worst thing that will happen? You will have learnt a way to do it differently next time.

So, don’t put something off because it scares you or you don’t have enough confidence.  Just do it.  No matter how much you may hate the thought of doing it.

You’ll prove to yourself that you can do it and that’s the best way to build confidence.  The best way to overcome fear is to face it head-on.  And, not only that.  You’ll also get that amazing buzz that comes from doing something that you didn’t think you were capable of.  That’s one of the biggest buzzes in the world, as Sophie found out after each of her races.

What have you been putting off because you are scared or don’t have enough confidence?  What if you just did it?  How would you feel? What would happen? How different would your life be?  How differently would you view yourself?