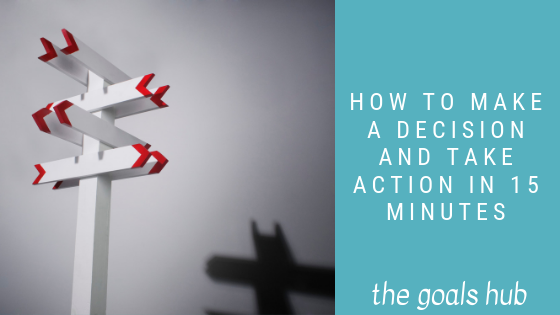 Owning my own business I often fall into the trap of having too many ideas going through my head at once and wondering which one I’m going to pick to move forward.   To help overcome the overwhelm, I put together a five step process on how to make a decision and take action.

This process is simple, and helps with indecisiveness (something I am hit with every now and then).  It’s a simple, quick easy process you can use for yourself.  It also applies equally as well in business with team decisions and to help guide children with making decisions and taking action.

So, if you have a few ideas and are getting stuck in indecisiveness. Or, you’ve made a decision but don’t know where to start, this five step process will help you pick one idea and take action now.

Step one is getting your ideas on paper.  Just write down your top 5-10 ideas.  These are the ideas that are consuming you.  You keep thinking of them, but you just don’t know what to do with them. It doesn’t matter what the idea is or how silly they sound, just write them down.

Step Two – Rate each idea based on how you feel about it:

Now you have your list of 5-10 ideas in front of you, rate each idea based on how you are feeling.

This may sound counter-intuitive.  Shouldn’t decisions be based on logic, not feelings?  The reality is, decisions are emotional, not logical.

Research by neuroscientist Antonio Damasio, has shown that emotions play a central role in social cognition and decision-making. He studied people with damage in the part of the brain where emotions are generated which meant they were unable to feel emotions.

He found they all had something in common. They couldn’t make decisions. They could describe what they should be doing in logical terms, yet they found it very difficult to make even simple decisions, such as what to eat.

Given decisions are based on emotions and how we feel, review your list and rate each idea from 0-10 based on how you feel.

A score of zero is a blaahh feeling – you’re not really that excited by it at all.

A five or six might be a lukewarm feeling – the idea feels OK but not great.

Your rating at this point isn’t about whether you think you can or can’t do it.  Your rating is about how you feel about the idea.

If you are having trouble rating your ideas, then think of each idea and notice how it feels in your body.  This will give you a better idea of how you feel about that idea rather than if you try to ‘logically’ come up with a score.

Step Three – Remove anything that is a 7 or below:

Step three is prioritising your ideas.  Scratch out anything that it 7 or below.  And remember, just because you are scratching it out now doesn’t mean it’s gone forever.   It just means it’s not for now.

If you had 10 ideas to start with, then after doing this you should be down to a couple of ideas.  Now look at those ideas and notice what still makes you really excited.

Remember, this is not whether you can think you can do it or not.  Of course you can do it!. Any thoughts that you can’t do it are your doubts.  To find out how to manage your doubts you can read more here.

This step is really about just getting to the final one or two ideas so that you can pick the one that you are going to move forward with.

Now it’s time for you to pick your one idea that you are going to take action on.  At this stage, you might be telling yourself ‘I can’t pick just one!’.

Remember, if you don’t pick the other idea it doesn’t mean you won’t do it.  It just means you aren’t doing it now.

This step can be a little scary because it’s time to decide.

At this point you need to put thoughts of failure aside.  It’s time to be certain about your choice so go ahead, it’s time to pick your one idea.

Look at the idea you have picked.  What’s one action you can take to get started with this idea?  It doesn’t need to be big, it just needs to be something. What’s the easiest thing you can do?  Do that.

Action creates momentum.  Once you’ve done one thing, you’ve overcome the hurdle of starting.  It’s much easier to keep going once you’ve started.

Action creates confidence. You’ve proven to yourself you can do it.

Once you have an identity, or a belief about yourself, it is easier to maintain motivation and take the required actions.  They are no longer actions you need to do.  They become actions you must do because they are aligned with your belief about who you are.  You can read more about identity and goal setting here.

That’s the quick, five step process to pick an idea and take action in 15 minutes.

If you found you got a stuck at the final step, that’s OK.  Once people decide what they want to do, this is usually where they get stuck. They get stuck thinking ‘can I really do that?’.

And, the answer to that is ‘of course you can!’  The only thing stopping you now is your self-doubt and you can learn more about managing that here.