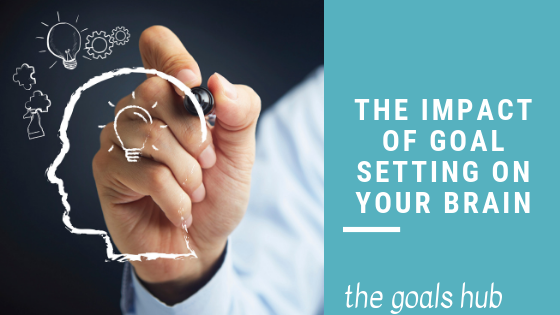 The Impact of Goal Setting On Your Brain.

Most people know that goal setting is beneficial.  Goals are a motivator; they give you something to work towards.  They push you out of your comfort zone, forcing you to grow and develop (a core need of all individuals).  And, through achieving something you may not have thought possible, they help build confidence.

When you set goals, it impacts the brain in the following ways:

So, what does this look like when it is playing out?

When you set goals wholeheartedly and fully commit to them, it has a powerful impact on how you see yourself.  This is because your brain can’t tell the difference between what it is you want and what it is you have.  When you set clear, specific, measurable goals and envision yourself having achieved them, your brain automatically rewires itself and adjusts your self-image to align with that goal.  In your brain, the achievement of that goal becomes part of your identity of who you are.

When you achieve that goal, you experience fulfilment.  Your reality matches your view of yourself.  If you haven’t yet achieved that goal, you are put in a state of tension.  There is tension between how you think of yourself and your actual reality. This tension is known as cognitive dissonance.

Cognitive dissonance is mental discomfort (psychological stress) experienced by a person who holds two or more contradictory beliefs, ideas, or values.  In this case, it is the belief that you have achieved something that in fact, you haven’t yet.  Your brain will try to resolve this tension by finding ways to work towards your goal until you achieve it.

If you really want something, commit to it wholeheartedly.  Visual yourself achieving that goal.  Visualise all the steps you need to take and how you take them.  Really step into the time when you have achieved the goal and noticed how it feels, notice what you are telling yourself and what others are telling you and notice what you are doing differently.  The more you can bring your goal to life, mentally, the more your brain will seek out ways to achieve your goal so it aligns with your self-image.

Your brain is awash with chemicals.  One of those chemicals is dopamine.  Dopamine has been referred to as the feel-good chemical and is associated with addiction, attention and motivation (among other things).

On the flip side, if you do something and the outcome was negative, dopamine is hampered so that you avoid repeating those behaviours.

To really use this to your advantage, when first starting out with a goal, make your initial milestones and steps so easy to do that you can’t not do them (read more about starting small here).  Even the achievement of the smallest tasks or actions will result in a release of dopamine which will keep you motivated.

Something to be aware of is the flip side of dopamine. Failing to meet your goal will mean your dopamine supply will get cut off and it can psychologically hurt.  You may feel feelings of loss, anxiety and sadness.  You may feel like a failure and this alone is enough to result in people giving up, or worse, not even starting.

To combat this, go into your goal setting with contingency plans.  Anticipate roadblocks and obstacles so that you have a plan for them.  Rather than view an obstacle as failure, view it as a natural step in the process towards your goal.

View the obstacle or roadblock as feedback, not failure.  Feedback that is telling you that you need to do something different.  The more you can be flexible in your approach towards achieving your goal, the greater chance that you’ll overcome the cut-off of dopamine, re-plan, get back on track and get that dopamine firing again.

The human brain is a habit creation machine. A habit is a routine of behaviour that is repeated regularly and tends to occur subconsciously. Charles Duhigg, the author of the Power of Habits, states that “about 40% to 45% of what we do everyday sort of feels like a decision, but it’s actually habit.”

The reason for this is your brain wants to find routines that have succeeded in the past and allow you to repeat those actions again in the future without having to think about them explicitly.  The more you can do automatically, the more you free your mental capacity for other tasks.

Often, to achieve a goal you’ve set, will require you to change your habits/behaviours.

However, in reality, this is a lot harder.  That’s because the part of your brain that says you will change a habit is different to the part of the brain to where habits are formed.

The part of your brain that says you will ‘stop eating chocolate’ is the prefrontal cortex, part of your ‘conscious’ brain.    This differs from the part of the brain that stores your habits.  When a behaviour becomes a habit and becomes automatic, it moves into the basal ganglia, which is one of the oldest structures in your brain.

If your goal requires you to change habits, the part planning for and committing to the change (the prefrontal cortex) does not communicate with the part of the brain that controls the habit (the basal ganglia).

Rather than just make the decision to change your habits, understand that planning for it and relying on willpower alone aren’t enough.

Instead, become deliberate about your habits.  Break your habit down and uncover the cue that triggers the habit, and the reward that you are seeking.

Set up strategies that support your habits, such as:

So, you now know the impact of goal setting on your brain.  And, it’s clear, there’s a lot going when you decide to commit to achieving a desired goal.  As such, goal setting is a process that shouldn’t be taken lightly.

If you want something differently, truly want it, then picture yourself having achieved that goal (link it to your self-identity).  Then, break it down into no-fail, easy steps (to get your dopamine hits).  Finally, become deliberate with your habits, using strategies to change them to what you need in order to reach your goal.