The Goals Hub - Want to get more done? Learn how to say no!
Skip to content 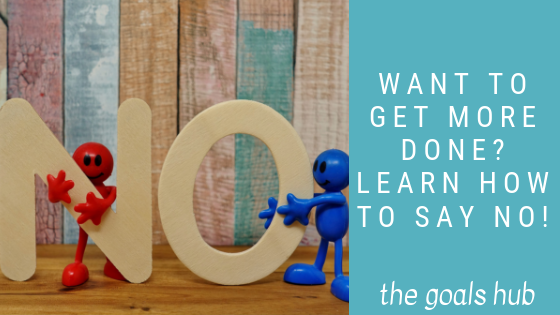 No. It’s such a small, tiny word, yet it can sometimes feel like one of the hardest to say. That’s why you end up saying yes to many things you don’t want to do, which leaves you no time to do the things you want to do or should be doing.  So, maybe it’s time to learn how to say no.

“Not doing something will always be faster than doing it.” – James Clear

Saying yes is often just a default response. Most people do it without thinking.  Someone asks you to do something and you automatically reply, ‘sure’. Five minutes later you’re feeling stressed and overwhelmed and completely regretful of saying yes.

You need to remember, you chose to say yes.  Had you responded differently, rather than responding by default, that feeling of stress or overwhelm needn’t happen.

Why do we say yes so easily?

There are a few simple reasons why we say yes so easily.

We don’t want to seem rude or unhelpful.

The request comes from someone that we have to work with in the future and we want to build/maintain that relationship.

They are our friend and we want to help them.

We want to be known as helpful.

And, finally, we have an internal view of ourselves that we are helpful or the someone that gets things done. Cognitive dissonance tells us that it is very hard to do something (i.e. say no) that isn’t aligned with our identity of our self (i.e. I’m helpful).

What if saying yes is actually saying no?:

James Clear (note 1) shares a quote from economist Tim Harford, “Every time we say yes to a request, we are also saying no to anything else we might accomplish with the time.”

If you have a hard time saying no, it helps to think by saying yes to this, what else am I actually saying no to. For example, if I say yes to attending that meeting this afternoon, what priorities am I saying no to getting done in that time.

When to say no:

First remember, even though it can feel difficult, saying no will help you become more productive.

Time is a limited resource, it is the one thing that you will never get back. Once it is gone, it is gone for good. Saying yes, all the time, is the equivalent of opening up your bank account to everyone and saying, ‘take it, it’s yours, take what you like’.

That’s why, you need to say no to whatever isn’t leading you toward your goals and your priorities.

Saying yes can be a form of procrastination: 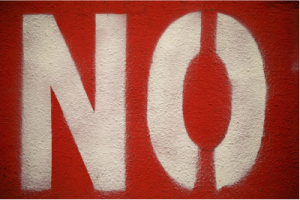 How to say no:

Given it can be difficult to say this tiny two letter word, having some strategies can help.

Secondly, notice your reaction when you are asked. If your initial reaction is ‘absolutely’, then it’s something you’re excited about. Don’t question whether to say yes or no. If you don’t get that reaction, it could be a good time to say no.

Thirdly, say no slowly.  Michael Bungay Stanier shares some questions to ask that will help you stay ‘curious before committing’. These are:

Finally, if it turns out to be something that you must do (i.e. it’s come from your manager and there is no getting out of it), don’t forget to ask the person when it is due by. You may find you don’t have to drop everything you are working on now to complete it, but rather can schedule it into a less busy time.

Is it time to start saying no?

So, did you learn how to say no?  How are you going to respond next time someone asks you to do something?

Rather than go to the default response of yes, pause and think about your response. Get curious and ask some more questions. You will find by doing this, you are less busy working on other people’s priorities which give you time to work on yours.

You need to add a widget, row, or prebuilt layout before you’ll see anything here. 🙂