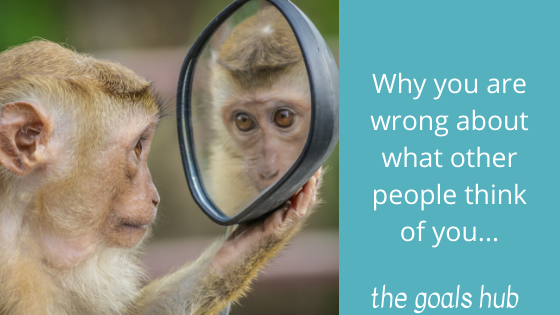 I had a recent conversation with a client who was worried about what her colleagues thought of her and worried they were talking about her.   My client is a Mum and balances work and family and children, which often means she runs out the door as soon as she can each afternoon (let me just add here, as she should be able too!).  She was concerned, and even quite anxious, about the perception this was creating about her and that people in the office were thinking that she wasn’t engaged, didn’t care, was slacking off, etc. etc.  Which, of course, was very far from the truth.

Now a typical response in situations like this is to say things well-meaning things like ‘they won’t think that’, ‘it doesn’t matter what other people think’, ‘you can’t control what people think’, etc. etc.

While these responses are well-meaning, they don’t do much to help.  They are rational responses to an emotional situation.

What I helped my client realise is you cannot, ever, know what another person is thinking of you (it’s called mind-reading and it’s something we are just not capable of!).  You make up a story of what you think someone thinks about you, based entirely on what you think of you.  What you think other people think of you is YOUR THINKING OF YOU.

‘how did she get that role, she’s not good enough, qualified enough, experienced enough’

‘she looks awful in that’

‘she doesn’t pull her weight around here and it always leaves early’,

Or what ever else you’re worried they are thinking, what you are doing is projecting is your own thoughts of you, onto others.

I spent most of my corporate career looking like everything was great.  I had great roles, got promoted every 12-18 months, was given amazing opportunities but internally I was a mess.  The smallest things could send me cascading into a spiral of ‘I’m not good enough’, ‘they’ll find out I have no idea what I’m doing’, ‘I’m a bad manager’, ‘wish I was a good as that person’, ‘I think they wish someone else better was doing this’ etc. etc.  It didn’t matter how often I was told I was doing a good job, I kept waiting for the ‘but…’.  And, if an error was picked up in my work, I was convinced they thought I was hopeless and had made a bad choice in choosing me.

If you doubt yourself or lack confidence and then attack yourself because of this, you’ll think others are attacking you too.  That’s why a look from someone can cause you to create a whole story about what they think about you.  Or, a simple email or text message can send you into a spin of ‘they think I’m hopeless’, ‘I’m not good enough’, ‘they are talking about me’, etc.

On the other hand, when you feel confident about something, what someone else is thinking about you with regards to that thing, doesn’t even come up.

That’s why if you think you’re a bad parent, you’ll start thinking others think that of you.

If you lack confidence around the way you look, when you walk into a room you’ll assume every one thinks you look awful.

If you doubt your performance at work, you’ll imagine that others think you’re not up to it.

If you are worried about leaving work to get your kids, you’ll imagine colleagues talking behind your back saying you are slacking off.

If you are putting off doing something you want to because you are worried what people will think, or if you find yourself cascading into a spiral of the negative thoughts someone is having about you, stop.  Remind yourself that ‘hey, that’s what I’m thinking, not what they are thinking’.

Then, to move on from these thoughts, ask yourself ‘do I really want to be thinking this about myself?’.  If not, come up with a better thought to replace it with and practice that new thought, daily.  It might take a while to replace.  After all, you’ve probably been having that thought for the last 20, 30, 40 years. That means it won’t go away overnight, but, the first step to changing it is becoming aware of it.

So, remember, you can never know what someone is thinking of you.  You are only ‘mind-reading’ based on what you think of yourself.  So, if you don’t like what you think they think, then the only thing you can do it change your own thoughts.